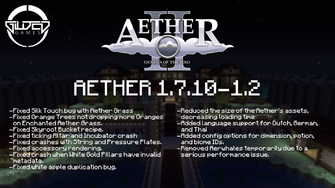 1.7.10-1.2 is an update to the Aether II mod, which was released on March 9, 2015.
This patch added language support for, Dutch, German, & Thai. This was another bug fix patch and removed the Noisestorm disc and Aerwhales. The mob spawning system was still in in a very buggy state, as Aerwhales would spawn and get lost in unloaded chunks, then loading those chunks would lag up servers.