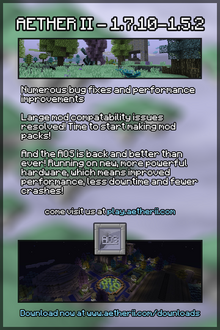 A huge bug fix update to the Aether II mod, which released on September 13, 2015. Big patches appear in this patch like party and dungeon fixes.

This patch was released on September 19, 2015 fixing some major bugs like severs crashing when using the Hammer of Notch and major mod pack incompatibilities.

This patch was released on November 22, 2015 fixing numerous bugs and performance improvements. There was also some mod comparability issues that were resolved. Also during this update the AOS had returned on this date.