“Found in clouds. Stops fall damage when landed on”
—Book of Lore

Aercloud is a type of block found in abundance in the Aether.

Aercloud does not require any tool to be obtained, in which when mined, it will drop itself.

It can be found in the sky, even very close to islands, and obviously, forms clouds in the Aether. Since it also may generate under islands, this makes it useful to both stop fall damage and help create mining scaffolds under islands.

Cold Aerclouds will prevent fall damage, and when standing in a column of aerclouds, the player's body will be inside the topmost block while the feet will be standing on the block below it. Despite that, aerclouds still can be climbed, as long as the height difference isn't over one block.

Some of the aerclouds do not have hitboxes. Dropped blocks and/or items may get stuck inside of cold aercloud blocks. As Cold Aerclouds sometimes blend in with the normal Overworld clouds, turning those off is advised. Sneaking (hold down the left Shift key) will disable special aercloud abilities.

Blue Aerclouds are uncommon, and will bounce players, mobs, and drops high into the air when stepped on or touched, but the player must be careful not to take fall damage from the high jump. The max jump height from a blue aercloud is 15 vertical blocks. You can use it to get high enough and then use an Aerbunny, or Cold Cloud Parachute to safely land.

Golden Aerclouds are the rarest, and will send any players, mobs, or drops downwards at a high speed when touched. This makes them extremely dangerous to obtain in large quantities. Having Gravitite Armor equipped, a Golden Feather, or a Cloud Parachute will negate this property. Golden Aerclouds do not seem to generate around surface level, making them only slightly common above average island height.

In the original The Aether mod, four Golden Aerclouds were used to craft one Golden Parachute. They had 20 uses (technically 21, if counting from zero) unlike Cold Cloud ones.

Storm Aerclouds are a new type of aercloud added in the Aether II. They have the same properties as Cold Aerclouds. Storm Aercloud can not be crafted into parachutes.

Purple Aerclouds blow any players, mobs, or drops in a specific direction, depending on the direction the player was standing in when placed. Like green aerclouds, gathering them can be difficult, as the wind push can cause fall damage or dropping out of the Aether and into the void below. A safety net of blocks can be used to counteract this.

Issues relating to Aercloud block are maintained on the bug tracker. Report issues for Aercloud there.

A player standing on a Cold Aercloud 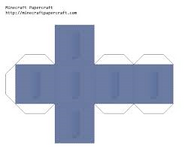 Unwraped storm cloud
Add a photo to this gallery
Retrieved from "https://aether.fandom.com/wiki/Aercloud?oldid=42617"
Community content is available under CC-BY-SA unless otherwise noted.