Aerogel is a type of block found in the Aether.

Issues relating to Aerogel block are maintained on the bug tracker. Report issues for Aerogel there. 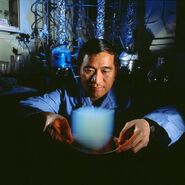 Aerogel's real life appearance, a sample held by Peter Tsou at the Jet Propulsion Laboratory, in the California Institute of Technology.
Add a photo to this gallery
Retrieved from "https://aether.fandom.com/wiki/Aerogel?oldid=42630"
Community content is available under CC-BY-SA unless otherwise noted.