“A paler dirt. Aether grass and skyroot trees will grow on it”
—Book of Lore

Aether Dirt is a type of block found in abundance in the Aether.

Aether Dirt does not require a shovel to be obtained, and so, will drop even if mined with bare hands.

Aether Dirt makes up the majority of the Aether, along with Holystone. It can be found all over islands, typically covering the first several surface layers before the Holystone.

Aether Dirt is the only block that can grow Aether plants and trees. Dirt. It is not possible to grow overworld Trees, Tall Grass or Wheat on it.

Issues relating to Aether Dirt block are maintained on the bug tracker. Report issues for Aether Dirt there.

Comparison between Grass-based Aether and Overworld 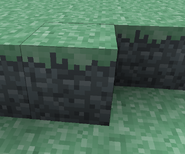 Overworld Aether Dirt
Add a photo to this gallery
Retrieved from "https://aether.fandom.com/wiki/Aether_Dirt?oldid=43119"
Community content is available under CC-BY-SA unless otherwise noted.