Angels were a mob that was in the mod from 1.5.2-1.6.2. it was removed in the summer hotfix due to it being in early development. Angels will be one of the NPC races in the Mutation update.

Angels have completely blue eyes, and have only one blue wing. They all have blonde hair, have yellow-ish skin, and wear robes with scarfs.

Their design was originally made in collaboration by Dark and Oscar Payn. Concepts were made by both artists and elements were combined into one new design, mostly based off Oscar's work but with design influences from Dark.

The final model was made by OscarPayn with help from Dark. It was also Oscar's and Dark's first collaboration on the project and helped introduce Dark as a member of the team.

Angels currently have no in-game texture so they are represented by the black and purple missing texture. 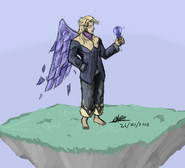 OscarPayn's Angel design
Add a photo to this gallery

In Aether II 1.5.2, it is possible to spawn Angels using creative spawn eggs. However, Angels currently do not have any function yet.

In Aether II 1.5.2, any Angel that is spawned either through creative or naturally(?) in multiplayer servers will bug and crash the server.

Retrieved from "https://aether.fandom.com/wiki/Angel?oldid=37557"
Community content is available under CC-BY-SA unless otherwise noted.