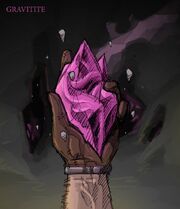 This page lists description quotes for the item Gravitite Ore, which originate from various sources. Sources are in game from the Book of Lore item (in the original The Aether mod) or officially as word of god from the developers.

"Gravitite, one of the strongest naturally occurring metals in the Aether, holds many interesting properties. Most notably is its ability to bend the gravity of objects around it, and its own. The cause is currently unknown, but it appears to be related to some kind of invisible energy source.

"This gravity defying effect can also be caused by electrical impulses through the metal, but only once the Gravitite has been treated with Ambrosium, which causes the metal to layer itself into thin plates.

"Gravitite can also be used for tools and armour. Its physics bending attributes cause it to feel incredibly light to the user, when in reality it’s almost as dense as lead, but the layered structure of the metal sheets also causes it to absorb impacts incredibly well.

"All these attributes, coupled with the rarity of the metal make it incredibly valuable to adventurers, warriors and traders alike." [1]