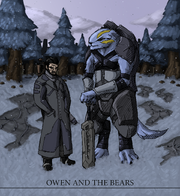 Official artwork for the Gruegar mob

This page lists description quotes for the Gruegar mob, which originate from various sources. Sources are in game from the Book of Lore item (in the original The Aether mod) or officially as word of god from the developers.

"In the northern reaches of the Aether, there lies a land bound in Ice; the Frostpines. The islands are covered in unique vegetation that thrives in the cold, the trees developed thick, warm bark, the creatures bare soft furry coats, but most notably, it is the home of the Gruegar, a mysterious race of Giant Mammals.

"Masters of language, the Gruegar work mostly as translators for the many native languages of the lands, but are also fierce warriors, brought up to covet physical and mental strength above all else.

"It is rumoured that the Gruegar were not originally from The Aether, and were instead placed there by a divine being called The Wind Writer, also known as The Great Lorist. It is said that this being gifted the Gruegar with language, and the ability to understand all tongues, including The Lorist’s writings themselves.

"Unfortunately this legend has caused other races to discriminate Gruegar colonists, leaving little to no interaction between the Gruegar and the native Angels. This said, the Valkyries still offer protection from injustice, as long as the Gruegar do not retaliate unlawfully.

"This prejudice puts the Gruegar in a very similar situation to the humans, who are seen as bottom feeder vermin to most. This has created a mutual agreement between the two races, that any human is welcome in Gruegar settlements, and vice versa.

"One famous traveller is Owen, the warrior for hire, who is looking for a new life in the Aether’s islands. He is seen as a kind of ambassador for humanity, creating strong relations with Gruegar chiefs across the Frostpine islands, sharing knowledge of human language and traditions, history of Gaea’s nations and kingdoms, and training younger Gruegar in hand to hand combat.

"There are few images of Owen, but one stands out as a strong sign of the bond between humanity and the Gruegar. This image was drawn and painted days after a Drac’san raid on a Gruegar village, which Owen helped rebuild shortly after the attack. He was gifted a Frost resistant coat, and had his picture drawn with the chief, 'Klurahng the Wise'..."[1]