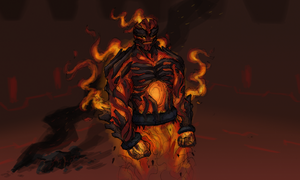 This page lists description quotes for the Sun Spirit mob, which originate from various sources. Sources are in game from the Book of Lore item (in the original The Aether mod) or officially as word of god from the developers.

“Hundreds of years ago, before humanity had touched the Aether, there was a powerful being who came from another world. This being brought great power, eternal daylight. This gift shed the Aether of Blight, a mysterious force of darkness that plagued the skies.

“Unfortunately, this being was not a kind creature, we know him now as Karthuul, the Sun Spirit, a tyrannical king hell bent on control over all living creatures in the Aether. Karthuul swiftly made enemies with the Valkyries, who believe in the freedom and liberty of individual cultures. So Karthuul’s sweeping “kingdom” did not sit well with them.

“Karthuul had few friends in the Angel’s Sun Sect either. He believed pursuits of technology and the study of the elements to be too dangerous, and attempted to sabotage their efforts through his many acolytes.

“Little did the powerful Sun Spirit know, making enemies with these two races would bring an end to his reign. The Valkyries and Sun Sect conspired to assassinate Karthuul, by sending the Angel’s most elite soldiers to the great Hellfire Temple, The Sun Spirit’s castle.

“As far as we know, their efforts failed, but whatever damage the elite soldiers did severely frightened Karthuul, and sent him into hiding. Effectively putting an end to his chokehold on the Aether’s people.

“For over fifty years, the Sun Spirit continued to maintain a certain level of influence through the cults and alliances he had made. That was until the human Stephen found his secret hiding place, and put an end to Karthuul once and for all.

“That said, the ancient cults that followed Karthuul say that the Sun Spirit’s alien mind can never die, even without a body. And that one day, he will return from death to burn all those who opposed him, and make kings of his acolytes.”[1]