The Book of Lore for Aether II[edit | edit source]

The Book of Lore is a returning item from the Original Aether, coming to the Aether II's 1.8mutation update. The new Book of Lore will not require you to put items in to it like in the Aether I. Instead, when an item is put into your inventory, a page in the book will be created about the item and how to make it; the page will stay forever. In addition, in order to discover a new mob, you just have to get close enough to it and the Book of Lore will create a page about that certain mob (not certain yet). It has also been showed in aermail that the upcoming Aether II's Book of Lore will contain a Forge tab, Knowledge tab and Discoveries tab. The Knowledge tab will act like the Aether I's Book of Lore; the Discoveries tab will show mobs you have discovered in your adventures, while the Forge tab will contain a sort of questing system. It is unknown if you get the book if you spawn, if you will have to craft it, or if you can only get them in dungeons. 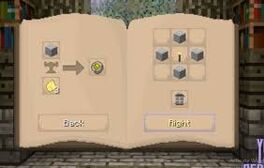 The new Book of Lore.
Retrieved from "https://aether.fandom.com/wiki/Book_of_Lore_(Mutation)?oldid=1776"
Categories: