The Bronze Dungeon is one of the three types of dungeons found in the Aether, and is considered the easiest one to conquer. The walls and floor of the dungeon cannot be broken until the dungeon is beaten, as with all other dungeons. 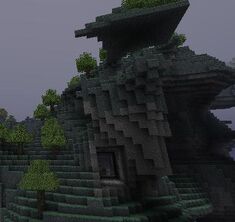 The entrance to a Bronze Dungeon

It can be found on the sides of Aether land masses. It is also possible for a Bronze Dungeon to have an entrance from its ceiling. Sometimes, the ceiling can be exposed to land, making it easier to find.

Player looking at a Dungeon ceiling

Another picture of the entrance to the bronze dungeon

The boss of the dungeon will first appear as a large, strange stone block in the middle of a dark room. To activate it, you must hit it with a pickaxe, shovel, or axe. The boss, also known as The Slider, can be killed by using a pickaxe, shovel, or axe. Zanite and Gravitite tools work the best. No matter what pickaxe you use, though, The Slider will take roughly 125 hits to kill. As well hitting it while it is already red from damage is wasteful as it does no damage but still damages whatever tool you are using.

In its first phase, this hulking terror appears with one, large, blue eye on each of the four sides of its body. The Slider will attempt to crush you into walls, into the floor, or even into the ceiling. Its bumps are powerful, and often times you will find yourself running from corner to corner of the room trying to get away from it. A great tactic is to simply circle the enemy while hitting it with your weapon. With good timing, you will not receive any damage at all. After many, many hits, the boss will go into its second phase.

In The Slider 's second phase, the blue eyes turn red, and its movements increase in speed. It attacks in its usual way, though, so simply keep circling like you were before.

The Slider does 3 hearts of damage whenever it hits you, as well as bouncing you in the air normally causing another half-heart of fall damage.

Once defeated, The Slider drops Carved Stone and a Bronze key . It will also reveal a set of four trap doors where it had been resting before you activated it. Below the doors, there is a Locked Chest. It is IMPOSSIBLE to break this chest. The only way to unlock it is with the Bronze Key that the boss drops. Inside this chest you will find several items such as a Hammer of Notch, Valkyrie Lance, Phoenix Bow, Book of Lore Volume 1, Lightning Knives, Sentry Boots, and more. (This Only Happens In Aether I).

In Aether II, Bronze Dungeons have been changed to The Slider's Labyrinth. Please relate to that article for more information. 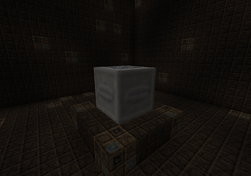 When you first find it, it will look like this!

The Slider, the boss of The Bronze Dungeons, in it's first phase
Retrieved from "https://aether.fandom.com/wiki/Bronze_Dungeon?oldid=9280"
Categories: