“When the sun falls, Cockatrices crawl away from their well-hidden nests, ready to attack!”
—kingbdogz


Cockatrices are a common bird-like hostile mob found in the Aether. Due to their appearance, they can easily be mistaken for colorful Moa.

Cockatrices spawn exclusively at night and may spawn in large groups.

Cockatrices will walk around a bit until they see the player, at which point they will aggressively fire poison darts. These darts inflict Nausea and Poison, which will inflict two hearts of damage. Vanilla poison will never reduce the player below one heart. They are also notably shorter than Moas and are capable of gliding. They also glow during the night, allowing players to differentiate Cockatrices from Moa more easily.

Issues relating to Cockatrice mob are maintained on the bug tracker. Report issues for Cockatrice there. 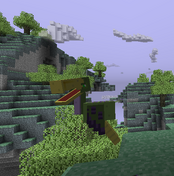 A Cockatrice in The Aether 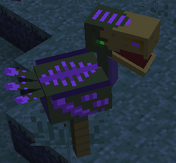 A Cockatrice glowing at night in The Aether II

Cockatrice Inside The Slider's Labyrinth

A player riding a Cockatrice 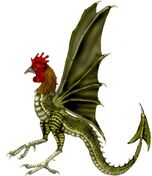 A depiction of the mythological cockatrice.

another cockatrice
Add a photo to this gallery

Retrieved from "https://aether.fandom.com/wiki/Cockatrice?oldid=43255"
Community content is available under CC-BY-SA unless otherwise noted.