This page is about the mob. For the block version, see Skyroot Chest Mimic.

Clicking or attempting to destroy the false chests will make mimics attack the player in response. It should also be noted that Mimics have quite a lot of health, making them even more dangerous than the other monsters.

Issues relating to Mimic mob are maintained on the bug tracker. Report issues for Mimic there. 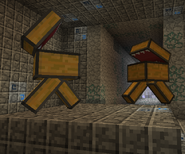 Classic Mimics fighting each other.

Classic Mimic.
Add a photo to this gallery
Retrieved from "https://aether.fandom.com/wiki/Mimic?oldid=42391"
Community content is available under CC-BY-SA unless otherwise noted.