Oscar is the creative director at Gilded Games and has been working on art, design, and lore for the Aether II: Highlands release. He lives in the United Kingdom. 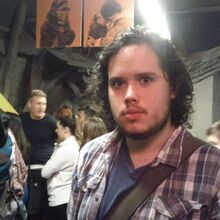 He is the mind behind many of the design ideas for creatures of The Aether such as the Gruegar. He was first hired for development on the Aether II in early 2012, where he drew many pieces of concept art depicting Angels and Demons, and the original Gruegar design (which was called the Aerbear at the time). He has collaborated with many other artists including SirStylus, a retired developer and Dark, a new artist hired in May 2013. His art style is mainly manga based, with features often used in superhero comic artwork. He is completely self taught and has had no external training.

Oscar is the Writer of the Aether's Lore and assists Hugo with the Game Design of future updates.