This page is about planned versions of the Aether II.

A port for 1.12 has been mentioned, with the work having very recently started on it.[1] 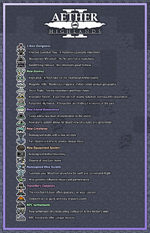 The Aether will soon receive a major content expansion via the planned upcoming Highlands Update, which besides the primary addition of new several major biomes and a brand new grid-based island generation system; will also include Angel NPC villages, new NPCs such as Edison, new dungeons (on the scale and content level of the original Aether mod), overhauled Moas (genetics and mount system in focus), overhauled equipment system, new lore, new mobs, blocks and items as well improvements to many of the Aether's cental mechanics.[2] 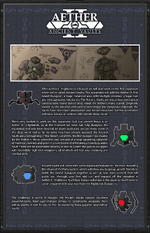 The Ancient Vault Update will be the next planned major content expansion to the Aether after the aforementioned Highlands Update. It will primarily introduce a largescale dungeon named the Ancient Vault, which will be based off of the original Bronze Dungeon and will serve as the main dungeon of the Highlands. The update will include new hostile mobs, a new boss, brand new loot and equipment as well as new story progression and lore.[3]

1.10[4] was a port of the Aether II to the current version of Minecraft, which is 1.10. It was mentioned several times by the Aether II developers, along with the scrapped Mutation update below. Public indev builds are now available as of November 4th.[5]

The Mutation Update was a scrapped upcoming update to the Aether II. It is now technically scrapped due to a change in direction for the mod, however some of it's intended features; such as Moa genetics or Edison, still remain.[6]