This article is about the Aether II block. For the material used to craft them, see Wrapping Paper.

Present is a type of block found in the Aether.

Presents can be obtained via crafting or mining already placed ones. If mined, the Present will drop itself, regardless of if it contains an item or not. The old Present can only be obtained via commands or inventory editors.

Hostile mobs also have a 20% chance to drop Presents if a Lucky Bell accessory is equipped. When dropped by a mob, it will have a random Wrapping Paper color and random bow color and will drop a random assortment of items when right-clicked.

It is also possible to obtain empty Presents but only via the /give command or Creative Mode. The item that is dropped from a Present is not associated to the color of the Present, so same colored Presents can give different items unless with mob-dropped ones. Presents uses a loot table similar to the way Continuum Orbs work, as shown below.

Old Presents spawned near Christmas Trees, which were occasionally found in areas with snow. They could not be obtained as a block legitimately, unless in Creative Mode. Breaking a present would either spawn activated TNT, give experience or drop Ginger Bread Men, a Candy Cane, or a Candy Cane Sword. The spawned TNT would only destroy 1-2 blocks, and the spawned TNT or experience drops were the most likely results.

Mob-dropped presents will always drop one Paper along with their random item. Present drops are constant, so duplicating the same exact present will give off the same item The list below contains all possibilities of what can be obtained in dropped presents.

Issues relating to Present block are maintained on the bug tracker. Report issues for Present there. 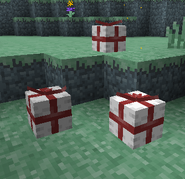 A set of player placed presents
Add a photo to this gallery
Retrieved from "https://aether.fandom.com/wiki/Present?oldid=42682"
Community content is available under CC-BY-SA unless otherwise noted.