This page is incomplete. The reason given is: Missing gravitite breaking times
Please help to improve the page, or discuss the issue on the talk page.
Please remove this template once the reason is no longer valid.

Sentry Stone is a rare block that makes a portion of Slider's Labyrinth dungeons in the Aether.

In 1.10[upcoming], Sentry Stone is now replaced by Labyrinth Lightstone.

Issues relating to Sentry Stone block are maintained on the bug tracker. Report issues for Sentry Stone there. 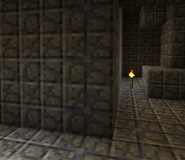 The inside of one of the labyrinths