Skyroot Trap Door is a type of mechanism block found in the Aether.

To break a trap door, attack it. It does not require an axe to be obtained, and so, will drop even if mined with bare hands, but mining it with an axe is faster.

Skyroot Trap Doors can be open and closed by the player or via redstone power and act as barriers to keep other players and mobs out of areas except function in a vertical manner unlike normal doors. Skyroot Trap Doors cannot be placed without a solid block attached to them. 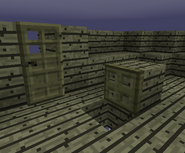 A Skyroot Door and Skyroot Trap Door
Add a photo to this gallery
Retrieved from "https://aether.fandom.com/wiki/Skyroot_Trap_Door?oldid=40687"
Community content is available under CC-BY-SA unless otherwise noted.