Sliders are boss mobs found at the end of Slider's Labyrinth dungeons.

There is one Slider per instance of Slider's Labyrinth dungeon. In order to be able to fight it, the player must defeat three mini-bosses (Sentry Guardian, Slider Host Mimic, and Labyrinth Eye) in the dungeon to obtain keys, which are needed to open a Slider's door.

Slider bosses can only be hurt via pickaxes and is immune to all other forms of weapons. The Slider may also charge at the player again right after attacking the player once, and has the capability to spawn different Sentry types to thwart the player.

After reaching critical health, a Slider will turn red and move much faster. Sliders are capable destroying any type of block that is not Divine Carved Stone or Divine Sentry Stone. Upon defeat, a Slider will drop a large assortment of loot, ranging from simple food items to valuable armor and weapons. 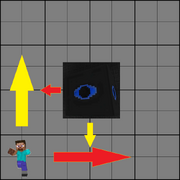 A strategy on how to avoid the Slider's attacks.

Issues relating to Slider mob are maintained on the bug tracker. Report issues for Slider there.