Slider Host Mimics are mini-boss mobs in the Aether. It resembles the Slider but, as its name implies, it is nothing more than a mimic of the Slider but is still quite dangerous.

After being attacked, the Mimic will levitate itself and will start to spawn Mini Sliders, which are small, red sliders. The Mini Sliders will home-in on the player and attack them, dealing three hearts of damage each. Going too far away will make Mini Sliders despawn and cause the Mimic to go dormant.

The Slider Host Mimic is the only neutral mob not only in the sliders labyrinth, but also in the entire aether dimension. 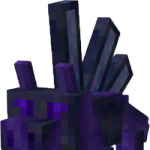