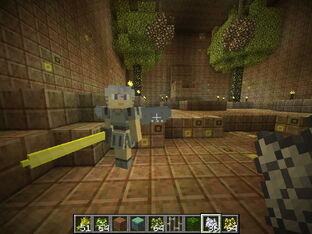 The Valkyrie Queen is the boss of the Silver Dungeon in The Aether I mod. As of now, she is not present in the Aether II.

She is the second-hardest boss in the Aether. She rules over the Valkyries from her throne room in the heart of the Silver Dungeon. She looks like other Valkyries except she only spawns in her throne room. She can do considerable damage to you so it is advisable to have good armor and healing items.

She, like all Valkyries, is a very honorable creature and will only fight you once you have defeated 10 Valkyries and collected their victory medals. Then, with the medals, you must right-click her with the stack of 10 victory medals. She will then tell you to fight her when you are ready. Once you strike her, the fight will begin. She is very strong and can do 3 hearts of damage with each attack. If you need to heal it is recommended you run away from her and heal yourself at the same time. Also, she can occasionally send out orbs that, when they are out for a long time, cause damage in the area where the orb was. Every few hits she receives, she will teleport behind you, so if you see her disappear then look behind you and be ready. She can also jump very high so keep your eyes on her at all times. Just keep on hitting her, following a strategy that works for you.

Upon death, she will drop a silver key and a Gold Sword.

A secret compartment will also open up just in front of the throne with a Locked Chest that can be opened with the Silver Key. The rewards can be considerably good, such as Valkyrie Armor, Valkyrie Tools, Holy Sword, Invisibility Cloak, Golden Feather, Lightning Sword, Regeneration Stone, Book of Lore Volume 2, and Valkyrie Music Disc (Ascending Dawn).

Note that the Valkyrie Queen is not in the Aether II as of now.