This page is incomplete. The reason given is: Missing Gravitite breaking time
Please help to improve the page, or discuss the issue on the talk page.
Please remove this template once the reason is no longer valid.

This article is about the zanite ore. For the item dropped from it, see Zanite Gemstone.

Zanite Ore is a mineral block found in the Aether, and drops a Zanite Gemstone when mined.

Zanite Ore requires a Silk Touch enchanted pickaxe or Gravitite Pickaxe to be obtained, in which when mined, it will drop itself. If mined without a Silk Touch pickaxe (Holystone or higher), it will instead drop a Zanite Gemstone.

When new chunks are generated in the Aether, some Holystone may become Zanite Ore. It is slightly rarer than Ambrosium Ore and roughly as rare as Iron in the Overworld. It can be found anywhere on islands, but mostly on the sides or undersides of them.

Issues relating to Zanite Ore block are maintained on the bug tracker. Report issues for Zanite Ore there. 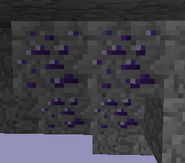 Naturally spawned Zanite Ore vein
Add a photo to this gallery
Retrieved from "https://aether.fandom.com/wiki/Zanite_Ore?oldid=43149"
Community content is available under CC-BY-SA unless otherwise noted.