“Of the abundance of creatures found in the Aether, none are quite as infamous as the pesky Zephyr.”
—Book of Lore

Zephyrs are hostile mobs that float through the sky of the Aether.

Zephyrs spawn during the day but will die as soon as night falls.

Zephyrs will fly down towards the player once they see the player and blow air at the player. This will launch the player into the air and without sufficient armor, the fall damage incurred is usually deadly. Due to this pattern, attacking and killing zephyrs would be far easier, given you can kill them before their wind attack.

Issues relating to Zephyr mob are maintained on the bug tracker. Report issues for Zephyr there. 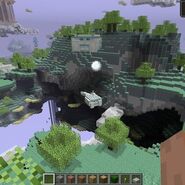 The old Zephyr texture posted by the Aether on Facebook using the old attack.

A new Zephyr using the new attack.
Add a photo to this gallery
Retrieved from "https://aether.fandom.com/wiki/Zephyr?oldid=42379"
Community content is available under CC-BY-SA unless otherwise noted.